From Textbook of Cardiology
Jump to navigation Jump to search

The cardiac action potential is a result of ions flowing through different ion channels. Ion channels are passages for ions (mainly Na+, K+, Ca2+ and Cl-) that facilitate movement through the cell membrane. Changes in the structure of these channels can open, inactivate or close these channels and thereby control the flow of ions into and out of the myocytes. Due to differences in the type and structure of ion channels, the various parts of the heart have slightly different action potential characteristics. Ion channels are mostly a passive passageway, where movement of ions is caused by the electrochemical gradient. In addition to these passive ion channels a few active trigger-dependent channels exist that open or close in response to certain stimuli (for instance acetylcholine or ATP). The changes in the membrane potential due to the movement of ions produce an action potential which lasts only a few hundreds of milliseconds. Disorders in single channels can lead to arrhythmias, as seen in the section primary arrhythmias. The action potential is propagated throughout the myocardium by the depolarization of the immediate environment of the cells and through intracellular coupling with gap-junctions.[1]

In summary during the depolarization, sodium ions (Na+) stream into the cytoplasm of the cell followed by a influx of calcium (Ca2+) ions (both from the inside (sarcoplasmatic reticulum) and outside of the cell). These Ca2+ ions cause the actual muscular contraction by coupling with the muscle fibers. During repolarization the cell returns to the resting membrane potential, due to the passive efflux of K+(Figure 1). In detail the (ventricular) action potential can be divided in five phases: [2, 3] 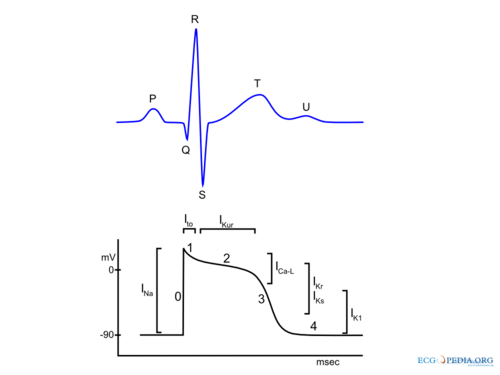 Rapid depolarization is started once the membrane potential reaches a certain threshold (about -70 to -60 mV). This produces activation of sodium channels and a rapid influx of Na+ and a corresponding rapid upstroke of the action potential. At higher potentials (-40 to -30) Ca2+ influx participates in the upstroke. In the sinus node and AV node a slower upstroke can be observed (Figure 2). This is because the rapid depolarization in these cells is mainly mediated by the slower acting Ca2+ ion channels. The slower activation produces a slower upstroke.

Final repolarization is mainly caused by inactivation of Ca2+ channels, reducing the influx of positive ions. Furthermore repolarizing K+ currents (delayed rectifier current IKs and IKr and inwardly rectifying current IK1 and IK,Ach) are activated which increase efflux of positive K+ ions. This results in an repolarization to the resting membrane potential.

During phase 4 of the action potential intracelullar and extracellular concentrations of ions are restored. Depending on cell type the resting membrane potential is between -50 to -95 mV. Sinus node and AV nodal cells have a higher resting membrane potential (-50 to -60 mV and -60 to -70 respectively) in comparison with atrial and ventricular cardiomyocytes (-80 to -90 mV). Sinus node cells and AV nodal cells (and to a lesser degree Purkinje fibers cells) have a special voltage dependent channel If, the funny current. Furthermore they lack IK1, a K+ ion channel that maintains the resting membrane potential in atrial and ventricular tissue. The If channel causes a slow depolarization in diastole, called the phase 4 diastolic depolarization, which results in normal automaticity. The frequency of the sinus node discharges are regulated by the autonomous nerve system and due to the relative high firing frequency (60-80 beats per minute) the sinus node dominates other potential pacemaker sites.

The cardiac conduction system (Figure 2) consist of specialized fast conducting tissue though which the electric activity of the heart spreads from the atria to the ventricles. The characteristics of the different parts of the conduction system are a result of the different characteristics of the individual myocytes. On a larger level, function is controlled predominantly by the autonomic nervous system (both vagal and sympathetic nerve system). Especially the sinus node and atrioventricular node are responsive to the autonomic nerve system. The ganglionic plexus, a conglomeration of both vagal and sympathetic nerves, form the intrinsic cardiac nerve system and innervate through a network of nerve fibers the atria and ventricles. The vagal and sympathetic nerve system are both continually active in the heart, but vagal activity dominates the tonic background stimulation of the autonomic nerve system. Moreover the heart is more susceptible to vagal stimulation. Vagal stimulation provokes a rapid response and the effect dissipates swiftly in contrast to sympathetic stimulation which has a slow onset and offset. Vagal stimulation results in a reduction in sinus node activation frequency and prolongs AV nodal conduction. These effects can occur simultaneously or independent of each other. Sympathetic stimulation exerts reverse effects, accelerating the sinus node firing frequency and improving AV nodal conduction. The autonomic nerve system has a small effect on cardiomyocytes. Vagal stimulation tends to prolong the refractory period and decrease the myocardial contractility. Sympathetic stimulation has the opposite effect on the cardiac tissue. The physiological modulation of cardiac conduction is vital to adaptation of the heart to rest and exercise. However the autonomic nervous system can contribute as a modifier is certain to facilitate the occurrence of certain arrhythmias.[3] 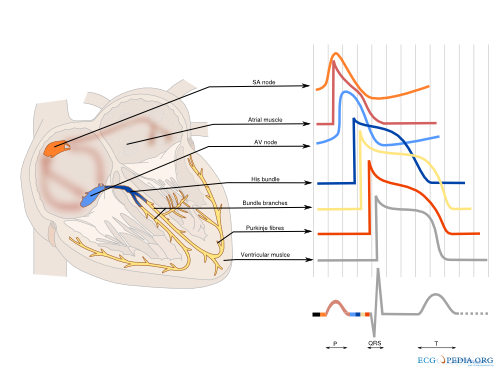 Figure 2. The different shapes of the cardiac action potential in the heart.

The sinus node is a densely innervated area located in the right atrium which is supplied by the right (55%-60%) or circumflex (40%-45%) coronary artery. It is a small structure of 10-20mm long and 2-3mm wide and contains a diversity of cells. These include pacemaker cells which are discharged synchronously due to mutual entrainment. This results in an activation wave front activating the rest of the atrium.

The connection between atria and ventricles is facilitated through the AV node, lying in the right atrial myocardium and a penetrating part, the bundle of His. The AV node acts as a gatekeeper, regulating impulse conduction from the atrium to the ventricle. Additionally, due to the phase 4 diastolic depolarization it can exhibit impulse formation. The AV node is supplied in most cases (85%-90%) by the right coronary artery or in the remaining cases the circumflex artery.

Connecting the distal AV node and the proximal bundle branches, the bundle of His is supplied by both the posterior and anterior descending coronary arteries. It is enclosed by the central fibrous body and membranous septum between the atria and the ventricles. The location and blood supply protect the bundle of His from external influences.

The ventricle is activated through the dense network of Purkinje fibers originating from the bundle branches. They penetrate the myocardium and are the starting point of the ventricular activation. The left ventricular areas first excited are the anterior and posterior paraseptal wall and the central left surface of the interventricular septum. The last part of the left ventricle to be activated is the posterobasal area. Septal activation starts in the middle third of the left side of the interventricular septum, and at the lower third at the junction of the septum and posterior wall. Activation of the right ventricle starts near the anterior papillary muscle 5 to 10 milliseconds after onset of the left ventricle.[4] 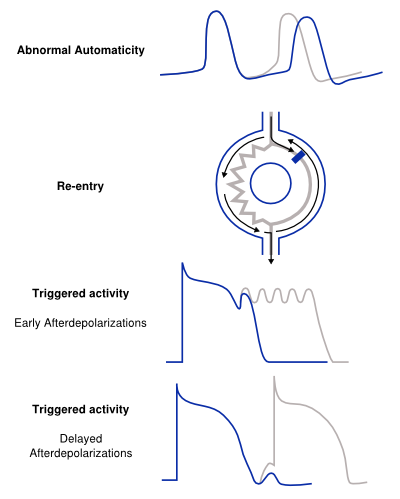 Figure 3. The different mechanisms of arrhythmia.

Re-entry or circus movement is a multicellular mechanism of arrhythmia. Important criteria for the development of re-entry are a circular pathway with an area in this circle of unidirectional block and a trigger to induce the re-entry movement. Re-entry can arise when an impulse enters the circuit, follows the circular pathway and is conducted through an unidirectional (slow conducting) pathway. Whilst the signal is in this pathway the surrounding myocardium repolarizes. If the surrounding myocardium has recovered from the refractory state, the impulse that exits the area of unidirectional block can reactivate this recovered myocardium. This process can repeat itself and thus form the basis of a re-entry tachycardia. Slow conduction and/or a short refractory period facilitate re-entry. The reason of unidirectional block can be anatomical (atrial flutter, AVNRT, AVRT) or functional (myocardial ischemia) or a combination of both.[6, 7]